The REOFFENDERS are on an indefinite break. Never say never, but we currently have no plans to play. However, we had joy and we had fun... and we blogged about it. Enjoy reading and reliving some good times. 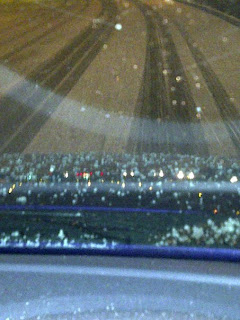 Yesterday was an interesting day, starting with Madge thinking he wouldn't be able to get to the gig because of snow. Panicking was done, deps were sought but it all blowed over and the situation got much better in South Devon.  Meanwhile, over in North Devon, Rob set off for the gig as normal and 12 miles later got stuck in nasty blizzardy snow and treacherous icy roads. Argh!  By this point, we'd made it as far as Starcross and pulled over to make more phonecalls.

Bully was sat in a pub in Exeter, not really expecting to do anything but have a quiet pint. Until we rang. He hotfooted it back home, got his bass gear together. We drove back from Starcross, picked him up, drove to his lockup to get his amp at which point he thought that he'd left the keys at home and I was getting a bit stressed. Found keys, got amp, drove to Teignmouth (on the way compiling a list of songs that Bully could remember without having a chance to go through anything) and got there 20 mins before showtime. Erm... we might be a bit late starting!

The PA was thrown together and we started the gig at 10pm! Phew!

It was fairly bouncing by the second half so thanks to everyone who braved the weather. Thanks to Radar who came up from Paignton - he was at our first paying gig and booked us several times for the BMAD festival. We go back a long way!  Thanks also to Ian, Maria and Kim who have supported us for years and are very sad about us going on hiatus. Thanks to Rob for trying to get to Teignmouth and, as a result, freezing his arse off in a stationary car for 2 hours and obviously, huge thanks to Bully for stepping in at the last minute.

Wellington tonight.... can we have it without such drama please? thanks

p.s. The New Quay Inn are selling a calendar of local people hiding their bits in a strategic manner. It's all for charity with 100% of the money going to Bowel Cancer. Kim from the New Quay is Miss September with just two pints of Guinness to spare her blushes! Buy it!